We're back to count the elk!  Each spring, the central Yellowstone (Madison, Firehole, and Gibbon River drainages) wintering elk herd is surveyed to obtain an estimate of the population size.  To do this, the project, run by Robert Garrott at Montana State University, performs what is called Mark-Resight surveys.  Basically, we "mark" (or instrument with a VHF collar) several elk (we try to maintain 10% of the population marked).  We then go back and count all the elk, comparing the number of marked individuals to unmarked individuals, allowing us to get a population estimate.  If we do this multiple times, we get an average population estimate.  This method has been used successfully on this project for many years.  Here is the count data from after the wolves were reintroduced until last year.  What will it be this year?? 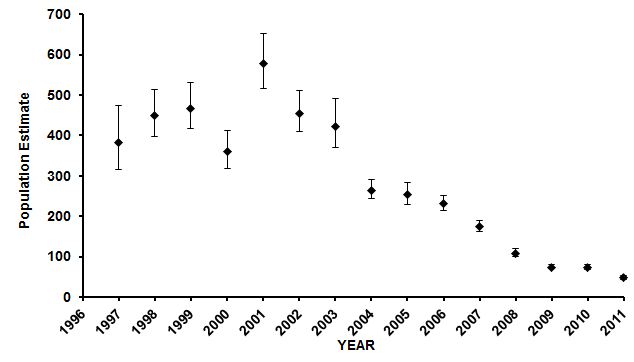 It is a very fascinating story, as you can see.  The elk herd declined significantly, to 10% of its original size.  Many of these elk migrated out, many were eaten by the wolves, as documented by the project.  Before we exterminated the wolves, was there ever supposed to be a wintering elk population here?  That's the question I ask.  I hope the answer is yes...that elk wintered there even with wolves, but it was at a very low herd size.  So maybe the herd is stabilizing?  But maybe the answer is no...before wolves were exterminated, there were no elk here.  It may be only a recent phenomenon that elk were ever allowed to survive in this system.   And so the counts go on... 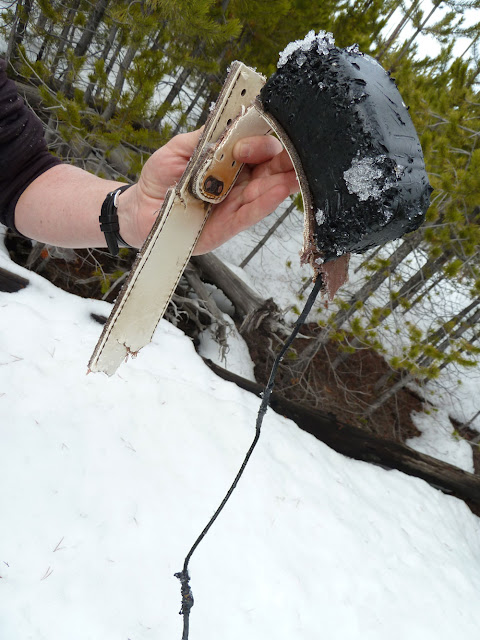 Collars on mortality signal (a quicker tempo signal that begins after 8 hours of non-movement) are sought after and retrieved.  Looks like the wolves had a good time with this one.


The wolves are still present, but the population in the park has been on a wild path of stabilization, with low numbers of wolves now in the system.  Wolf activity in our study area has appeared to diminish as well.  Will this stabilization permit the elk herd to survive?

Our surveys are conducted by vehicle, driving the drainages when the snow melts in the meadows which attract the elk to the canyon bottoms.  Some might question our methods...not leaving the road or not checking the higher country.  However, Claire (FWP biologist) and I spend considerable time hiking into the backcountry, partly for fun, but primarily to confirm what we suspect:  that there are NO elk anywhere but in the canyon bottoms.