Skip to main content
Posted by Unknown on August 04, 2011
I don't even know where to begin with this, my first post since April!  The past few months have flown by, and I hold much regret for my lack in writing.  My initial intent was to document the development and progress of Robert Garrott's new research endeavor, the Greater Yellowstone Area Mountain Ungulate Project, as well as the duties and challenges I have experienced in my position as part of the project.  Instead, I will summarize the current status and progress of the research I was/am/will be doing and then try harder in the future to write more!

During my time in Antarctica last fall-winter, Robert Garrott (from MSU, whom I have worked for in Antarctica and Yellowstone), offered me a full time position for 10.5 months as a "Research Assistant III," which I cheerfully accepted.  The position was threefold, including field work: (1) in Yellowstone during the spring performing elk population estimates of the Madison headwaters elk herd, (2) in the greater Yellowstone ecosystem (which includes all mountain ranges surrounding Yellowstone NP) aiding in the development and field work of the mountain ungulate project, and then (3) back in Antarctica this fall, for anther season studying Weddell seal population ecology.

Madison headwaters elk - Spring 2011
Mark-resight surveys were done for about a month to obtain an estimate of the Madison elk population in Yellowstone for this spring, which has been in continuous decline.  Mark-resight basically says this:  If you have a known amount of collared individuals in a population, and you take the ratio of collared individuals to uncollared individuals that you see in a survey event, you can obtain a population estimate.  If you do a bunch of these surveys, you can get an average population estimate.  So, every day, we drove the drainages (Madison, Firehole, Gibbon rivers) counting all the elk, noting whether they were collared or not.  We were also able to put out two new collars during a Fish and Wildlife Techniques course offered by the Ecology Department at Montana State.  This upped the number of collars deployed to seven...but then two elk died not too long after (different individuals than were just collared).  They just couldn't outlast the winter, which was a very harsh one.

These surveys resulted in a final spring population estimate of 47, down significantly from last years estimate of 72. 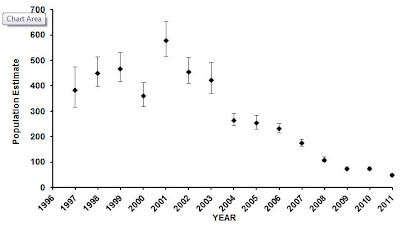 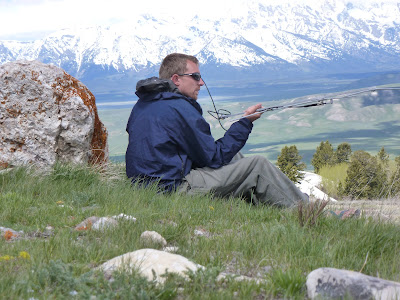 The project has its beginnings in 2009, as Robert Garrott began entertaining and acting on an idea to study bighorn sheep and mountain goats in the greater Yellowstone ecosystem.  His idea gained momentum as more state and federal agencies took interest in the research.  It may be of surprise to you to know that mountain goats are not native to the Yellowstone area.  Biologists in the 1950's and onward began introducing mountain goats to several ranges in Montana, Wyoming, and Idaho for sportsman.  Since those introductions, mountain goats have been expanding, pushing further into the high mountains in and around Yellowstone.  The expansion of this white climbers range has butted right into bighorn sheep range, and there is much concern over the effects of this, as bighorn are notorious for succumbing to many different pressures, primarily diseases, destruction of habitat, and becoming pancaked on roads and highways.  So what effects are the nonnative mountain goat having on the bighorn sheep?  No one really knows.

This, and also the interest in much more detailed habitat models, population dynamics, and spatial  dynamics for both species, has motivated biologists from the tristate area to form a large collaboration in the pursuit of mountain ungulate knowledge. ("Ungulate" refers to any hoofed animal, "mountain ungulate" refers to those hoofed animals that inhabit the high mountain areas, which, in our case, is only the mountain goat and the bighorn sheep.)

And so I was hired.

Since then, my skillset as an aspiring ecologist has quadrupled.

Here is a rundown of the tasks I have been charged with:

--Writing of proposals to obtain permits for radio-collar related capture for various agencies, including Yellowstone NP, US Forest Service, Montana Fish Wildlife and Parks, Wyoming Game and Fish Department
--Writing of a proposal for the International Animal Care and Use Committee
--Writing of a proposal for a US Geological Survey grant (unsuccessful)
--Creation of a database for capture and radio-collar data (GPS and VHF)
--Videography and editing for media to be published online
--Initiating the development of a website for the project (soon to be published!  I will let you know!)
--Ordering field equipment
--Collecting spring reproduction data from collared bighorn sheep
--Performing occupancy surveys as part of Megan O'Reilly's Masters project (more on this later!) 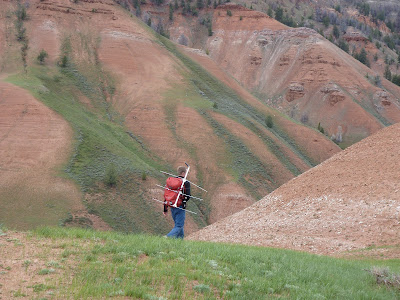 Weddell Seal Ecology, Antarctica
Logistics for getting down to Antarctica are quite intense, and these are being spearheaded by PhD student Thierry Chambert, whom I worked with last year on the ice.  It is required to be PQ'd (physically qualified) to lessen the chances that they will have to fly you back to civilization with some raging fingernail disease.  So, after two dentist visits (luckily I didn't have to do a physical again this year), I was PQ'd, and now I'm ready to tag some seals!  We depart around Oct. 1 for New Zealand, and then McMurdo, Antarctica.
Last season, we successfully deployed a round of temperature tags on seal pups and got some very cool data looking at how much time they spend swimming.  See below!

The following is data collected from temperature tag sensors placed on the rear flippers from two Weddell seal pups.  One swims many more times in its life.  How do we know this (see if there are any biological thinkers out there!)????

This up and coming season, I will be organizing and leading the deployment of another round of temperature tags.  More on this to come!


If you are interested in getting a better glimpse of the challenges and work of a dedicated biologist currently undertaking a Master's degree, Robert Miller (at Boise State University) has a wonderful blog documenting all aspects of the process as he attempts to better understand Northern goshawk ecology.