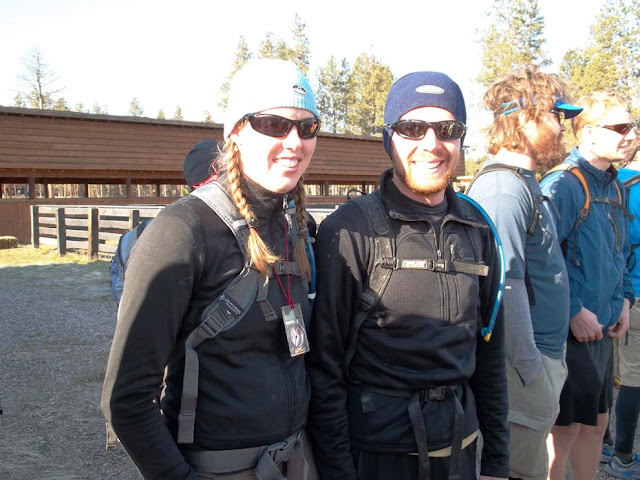 Who would have thought that skills acquired while studying wolves, elk, woodpeckers, and trees would help you conquer!  The skill I am speaking of is that of map and compass, which both Katie (my girlfriend) and I came to possess after previous field work.  Katie gained it whilst working as a forestry technician for the Bureau of Land Management and the U.S. Forest Service, and I gained it whilst working for the Forest Service and Montana State in Yellowstone N.P.  And what did we conquer???

With no experience and only half an idea of what it even is, Katie and I took part in our first ever adventure race, called the Black Bear Challenge, the beginner version of the Grizzly Man Adventure Race, in Missoula, Montana.  We raced as a coed team, and we are still dating.

I came up with the team name Pika, thinking that, wouldn't it be cool if a little squeaky psuedo-rabbit of the high alpine dominated every other team (this is the type of stuff Katie puts up with dating an ecologist)??  Far chance I thought.

The race requires the use of map and compass only (no GPS, no homing pigeons, etc) to find 16 stations dispersed throughout a 28,000 acre forest.  We were given the coordinates of each station the night before, at around 7pm, giving us the rest of the night to map out all the stations and pick a route (which takes much longer than you would think and forces you to lose sleep that is typically needed before an EIGHT HOUR race).  The next day, the shotgun blasted and we were off at 9am.  Everyone starts out running, but in about half a mile, is walking...the mountains are steep!

There are two ways you can navigate the woods...you can run madly up and down ridges and peaks that appear to be the correct location on the map based on the topography, or you can use your compass to travel along a straight line or bearing through the trees, sticking to your bearing no matter what topography or otherwise confronts you (mountain, creek, snow, cougar, etc).  We were relentless on the latter, only rarely pocketing our compass and traveling based off of map topography.  We hiked straight up steep slopes only to hike straight down another, just so we could hike back up another, and down the other side....but we had to stick to our compass bearing, no matter what, or we would miss the station.

How do you keep a bearing in a forest?  You "shoot" your bearing, picking a tree that it lines up with, hiking to that tree, then shoot another bearing to another tree.  Between bearings may only be 5 feet depending on tree density!  When a station is found, you punch your "passport" with a punch specific to that station, and continue on to the next station.


Katie and I slogged along all day, slowly but surely gaining more and more stations, as our bearings made late the night before were right on.  But as time went on...well...time went on.  Before we knew it, we had been out for hours, and we started thinking "sheesh...we aren't going to even come close to winning...most of the teams have probably finished by now!"  Conditions became miserable...slipping and sliding up and down slopes completely iced and snowy, legs becoming more and more weary.  Around our 12th station it became obvious that we would have to sacrifice one station if we were to make it back to the finish time at the required 5pm finish time.  We gained our 15th station, and headed for our bikes (another requirement in the race is that you have to finish with your bike...no bike=disqualified.  You can use your bike at any time during the race, however you choose to use it.  Katie and I chose just to leave it till last, just to pedal to the finish).  We had approximately 20 minutes left to get to the finish...and I was sure we were barely going to make it.

All my hope drained when we reached our bikes.  Katie's tire was flat.  I proceeded to rant about how dumb I was to not completely fix Katie's barely flat tire from the night before.  The whole race, all that effort, all for nothing...because of a stupid decision.  Katie tried to make me feel better, saying "it's ok...it's not your fault"...yeah, sure whatever, I ranted to myself.  But there was only one thing to do....change the flat and ride in to the finish.  To my amazement (and I think I impressed Katie a little too), I changed the tire in about 3 minutes or less, and we were off again, pedaling madly to the finish.  We crossed the finish line with less than 4 minutes to spare.

We were disappointed that we hadn't made better time as we expected to finish in about 4-5 hours.  Instead it took us almost 8 hours.  But we were pleased over the adventure of it nonetheless.

At the awards ceremony..."First place for coed to Team Pika!!!"  7 hours, 57 minutes, 9 seconds.  We had three more stations than second place, and four more than third place.


Much thanks to Beth Elzinga (Katie's mother) for taking all the photos!