One Scoop and the Season Begins: The Return to Yellowstone 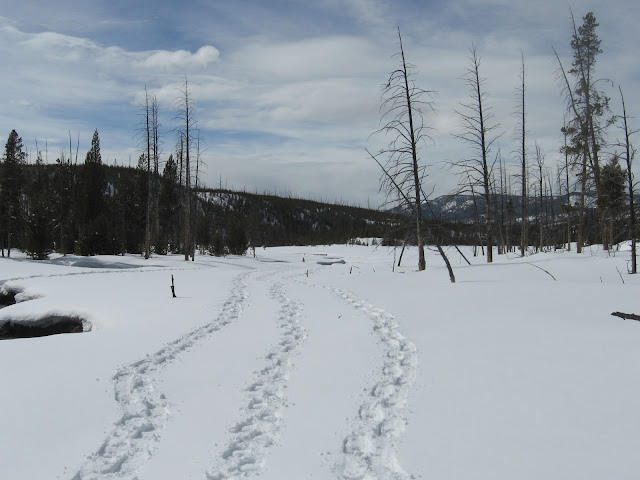 The snow is packed high in central Yellowstone.  Standing under the full moon sky, shadows starkly contrasting against the silver-blue snow (apparently the largest full moon in 18 years), Claire (my coworker for the season), Katie (my girlfriend), and I clamber up a six foot high wall of snow pushed up on the margins of the bridge at Madison Junction by the snow plows on their annual migration to clear all the roads in preparation for the masses.  But for now, the park is clear of all visitors.  And the researchers are back, continuing the project's 20th season of elk population research.

The research has been pared down considerably, as the project has published its primary findings.  However, interest in the outcome of the elk population due to wolf presence still remains.  Will the population be eliminated from the Madison-Firehole drainages completely?  Or is last season's pulse of new calves that survived the winter signaling a stabilization of the population? 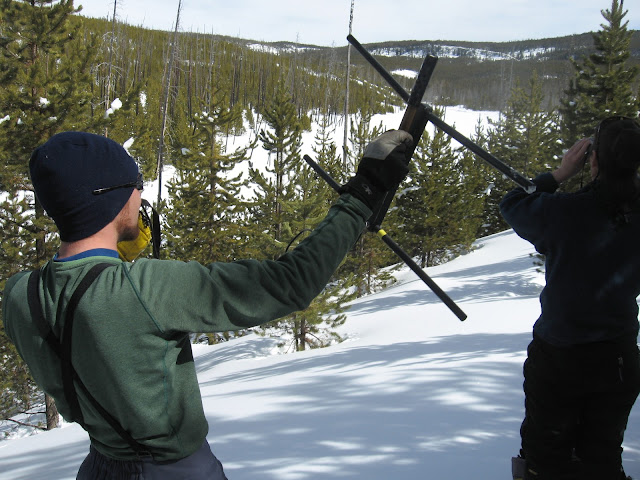 The next day, we geared up, antennas and receivers in hand, and marched off toward the signal.  We crossed the shallow Gibbon River, scrambled up the steep bank and trekked through the dense dog-hair lodgepole.  For hours we marched, slogging through the heavy snow, dragging our snow-laden snowshoes along beneath us.  We followed the strength of the signal obsessively, like a wolf following the scent of an elk.  It led us up out of the creek bottom into unburned slopes, then up and down forested swales.  The signal looped us back toward the upper reaches of the creek...louder and louder...now pounding...it must be near.

It must be near, yes.  But...the snow is four feet deep...and who knows how long ago the elk died...for all we know, the collar could be at the very bottom, anywhere within a 20 square foot area.  I'm not about to dig out the whole neighborhood to find a collar...we will just have to come back when the snow is gone.  All this, going through my head.  I was verging on voicing my concerns, when Claire declares, "well...I think you should start digging somewhere here...I don't know where...just pick a place."  Thinking her crazy, I mentally roll my eyes, bend over, and make a single scoop in the snow.  "You hit it!!" Claire exclaims in a near scream.  I stop my digging, looking at her bewildered.  The signal had switched from mortality to its normal pulse, which only means one thing.  My shovel scoop had shifted the motion detector.  I had hit the collar on the first scoop.  I bent over, brushed away some snow, and lifted the collar from its cold grave.

And thus, the season in Yellowstone begins!!