Posted by Unknown on May 02, 2010
Every year, Outside Bozeman Magazine (one of the best local magazines I have ever read) runs a "Suby Tales" contest (this because Subaru is by far the most popular car in Bozeman; you are guaranteed, at the very least, three other Subaru's at every light that you stop at).  Two summers ago, during a field job searching for Mexican spotted owls in Zion National Park, something terrible happened to my Subaru.  This is the story I wrote for this years contest.  (The reply from the editor after I sent it:  "I have only two words: Holy sh**.")

A flash of light and an explosion repulsed the quiet of the desert.  Billowing flames and black smoke rippled against the towering canyon walls and lit up the dark, midnight sky.  Fully unaware of the distant blast and flare, my coworker, Steph, and I were miles away in a slot canyon, deep in sleep.  I wish I could say that I felt some odd feeling looming over me that night, some ominous foreboding or horrifying dream, but it was not so.  In fact, I slept very soundly.
The work week in Zion National Park was much like all the others.  We parked my 1998 Suby under the only available shade at the Lee Pass Trailhead and headed down the dry, dusty trail winding through the pinyon-juniper woodland.  Forging our way off-trail through flesh snagging scrub thickets and leg-devouring flash-flooded mud, our mission was to locate Mexican spotted owls in the labyrinth of slot canyons in the park.  After hours of trudging and only hearing our own hoots echo through the canyon, an owl finally responded.  Our mission successful and our bodies completely exhausted, we flopped immediately into bed and passed out.
Several miles away, back at the trailhead, my Subaru peacefully and patiently waited for our return.  There were no storm clouds that night, no lightning.  The heat of the day had passed, and only the midnight stars lit the cool desert.  But as the soft light of the morning arrived, a strange scene was revealed.
I awoke refreshed that morning, completely ignorant to two sobering facts: I would never see my gear-packed Subaru again and we were stranded in the desert of Utah.  That very day, unbeknownst to us, my Suby would be hauled to a junk yard in some obscure Utah town.  We pushed on through the scrub, rocks, and heat; business as usual in search for our next owl.  The following day, during a sweaty hike in the searing heat, we entertained ourselves with thoughts of sleeping in a comfy hotel bed and inhaling glutinous amounts of greasy food after reaching the trailhead where I knew my Subaru would be waiting.
As we struggled up the final stone steps to the parking lot, I glanced over to see my blessed Subaru.  That's funny, I thought to myself, my car doesn't look like it’s here...it must be behind another car.  Walking closer, I cried out to Steph; "My car is not here...!"  She didn’t believe me at first, but after looking up and scanning around, she entered the same state of bewilderment that had overcome me.  My darting eyes located the tree I had parked under.  No car.  My heart sank.  In place of my car, a black burned spot on the asphalt.  A sign on the no-longer-green, charred tree:  "Jesse DeVoe, Call Dispatch or the Kolob Visitor Center."  At the other end of the lot, I spotted a Boy Scout troop leader who was oblivious to any abnormal circumstance at hand.  With trembling voice, I said "it looks like my car burnt down...can I borrow a phone?”
When the previous morning’s veil of darkness had been lifted, a blackened, skeletal frame could be seen lying beneath a lone, half-charred tree.  The pavement was scorched and covered with ash.  Bits of metal and glass had been flung into the brush.  Melted aluminum and glass had oozed onto the asphalt.  The remains of my Subaru sat like the rotisserie-grilled carcass of a chicken, post-devourment by a famished family of four.
What evil creature lurked under the veil of darkness that night?  What wicked spirit consumed not just my car, but also my laptop, back-up hard drive, two cameras, wallet, cell phone, many years of accumulated (and expensive) technical gear, and, most importantly, my mother’s homemade chocolate banana bread?  Had the Park Service finally exceeded their tolerance for those darned owl researchers?  Had anti-Spotted owl cronies at long last achieved their vengeance?  My Subaru had exploded, and I shall never know why. 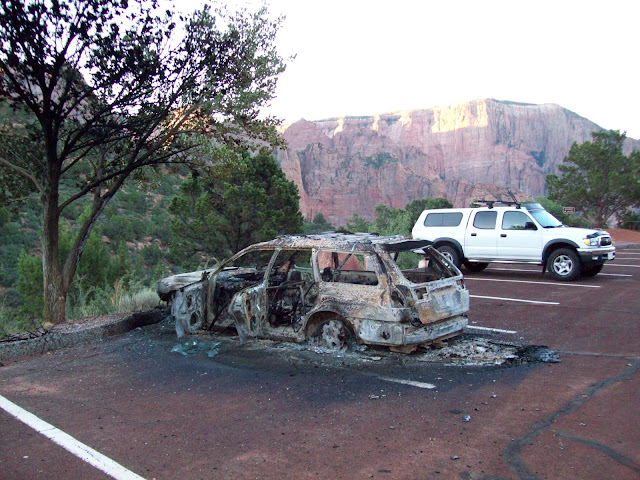 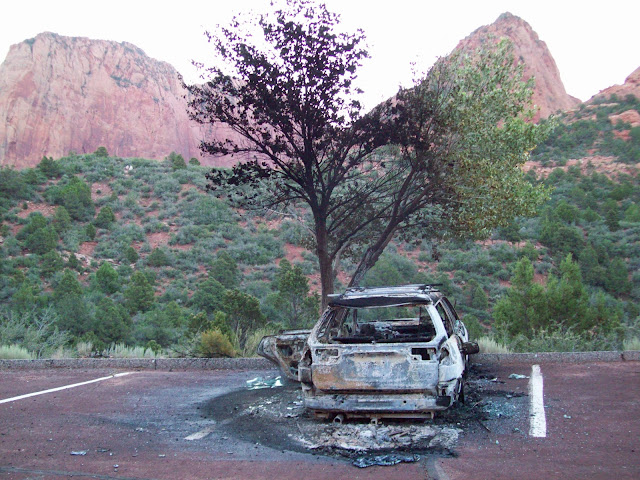 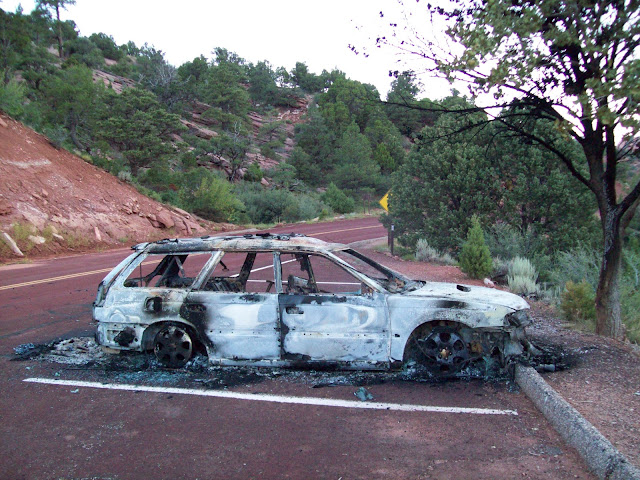 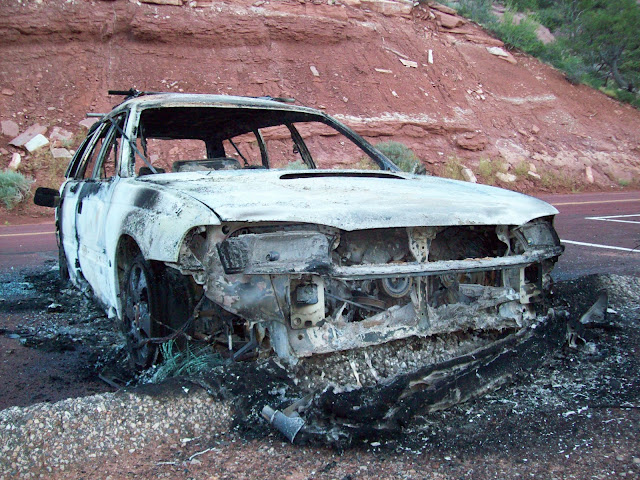 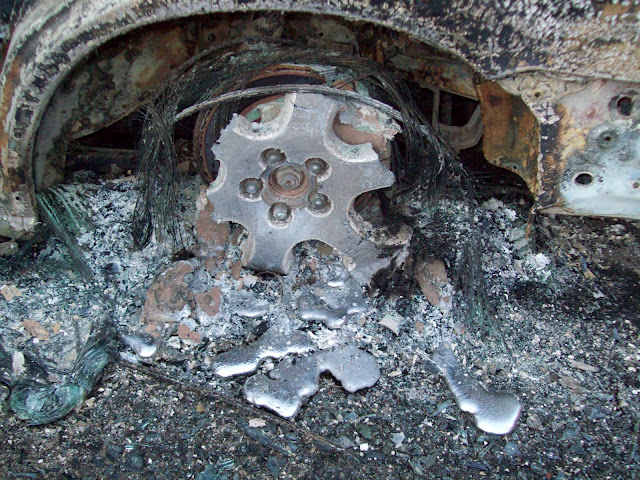 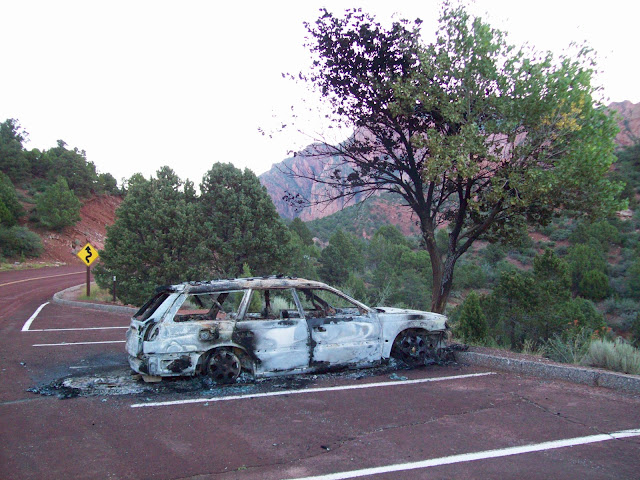 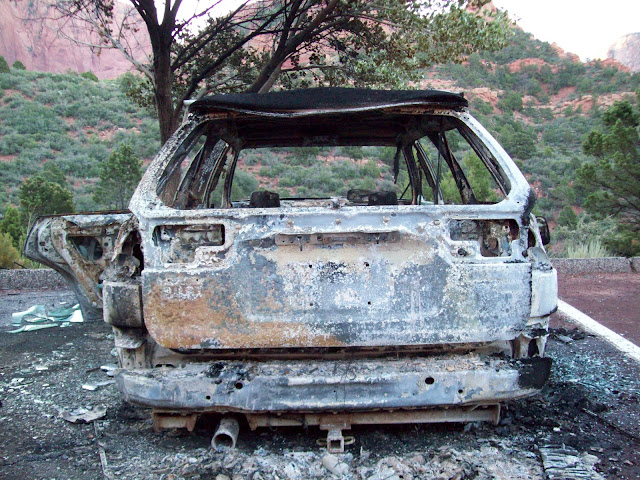