Posted by Unknown on April 21, 2010
The very large, very burly local residents of the Yellowstone stage have been making regular, and quite awesome appearances during the past two weeks.  The grizzlies that inhabit central Yellowstone tend to be darker than typical, ranging from dark brown to black in color, and we can often recognize individuals by certain coloration patterns.  For example, the "Preacher Bear" has a small vertical white stripe on his front shoulder blade, and the "Armpit Bear," as I fondly call him, has white under his front legs.  I was lucky enough, along with several students from Bob Garrott's Field Techniques course from Montana State University, to witness a very interesting interaction between these two bears.  If anyone knows anything about bears that can help me decipher exactly what was going on, it would be greatly appreciated:

We first saw the Armpit bear wandering slowly across the Fountain Flats meadow, headed directly towards a carcass that was hidden in the trees.  It (he/she?) was acting very nervous about approaching the area where the carcass was, and took a few sniffs in the air and looks around, before entering into the trees and disappearing.  Moments later, the Preacher bear came barreling out of the trees, acting very scared.  He would stop, turn around and look, then bolt again.  As he stopped and turned around again, the Armpit bear came sauntering out of the trees, walking straight toward Preacher.  Preacher allowed him to get closer, but still slowly walked in the opposite direction.  Eventually, Armpit caught up to Preacher, who was still acting very nervous and subservient, head down, seeming to try to not make eye contact.  The two bears came nose to nose, and we all waited for the tooth and claw fight that would surely follow...but it didn't.  Instead, the bears, with jaws agape, gently mouthed each other.  They then began to lay paws on each other, and the Armpit bear proceeded to climb half way up onto Preacher's back.  Why the terror turning to play?  Brothers?  Flirting?  But I keep going back to: why the running fright?   No pictures unfortunately (too dark).

The Preacher bear is locally famous, everyone in central Yellowstone knows about this massive, bison-killing, very human-tolerant bear.  I have seen him several times, often with very interesting behavior:

We had first spotted the wolves lounging in the meadow, without a care in the world.  Then out of the trees, the Preacher came walking out, casually sniffing around before slowly heading towards the sleeping wolves, where he proceeded to force them out of their dreamy state and push them around.  The wolves didn't seem to mind too much...they would just stand up, stretch, yawn, and get out of the bears way. 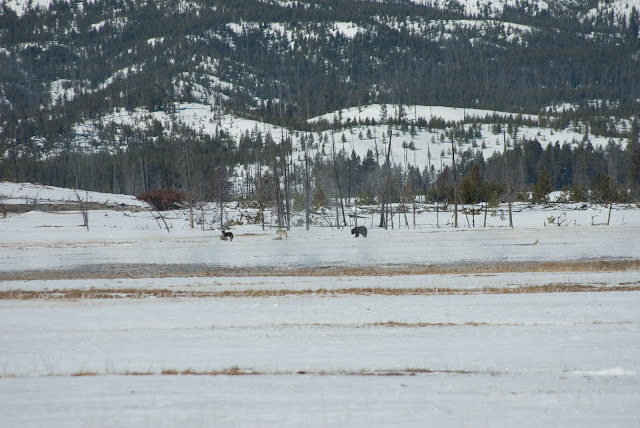 Two days ago, I chanced upon the Preacher bear on the side of the road.  Just another Preacher sighting, I thought to myself.  But, as always in Yellowstone, there is absolutely no predictability in anything.  Preacher began walking straight for a herd of bison across the river.  The bison were very alert to his presence, bunching up and nervously shuffling positions, but they didn't run...until he crossed the river. 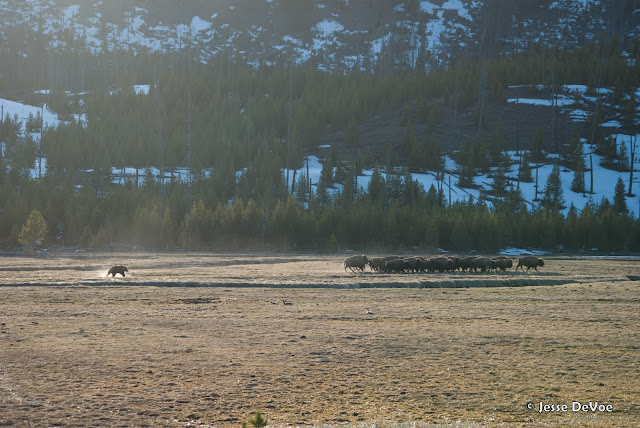 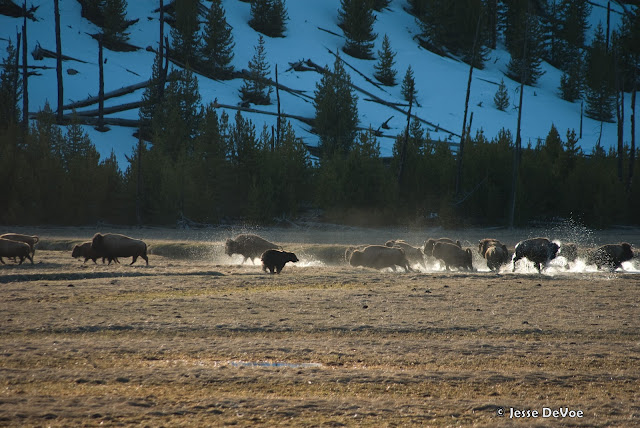 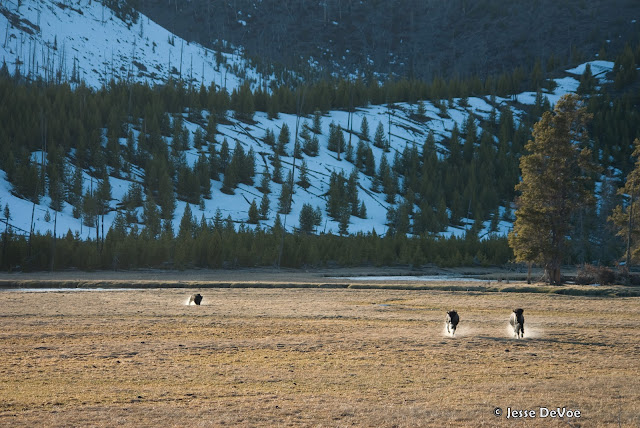 Unsuccessful, Preacher went for another try, but unfortunately, came away with nothing but wet fur.  No mistakes were made by the fleet-footed bison...too bad for the Preacher.