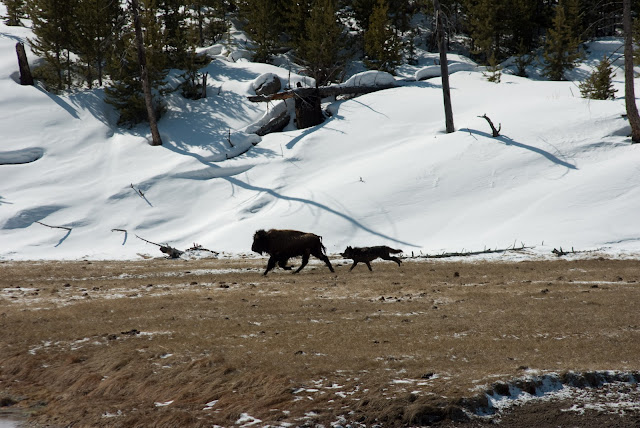 His performance was quite impressive.  In the face of three hungry wolves repeatedly lunging and snapping, the yearling bull bison showed much bravery and perseverance, even with a shredded and bloody hide and a bad limp.  He would go on to escape and survive the attacks, at least from these wolves. 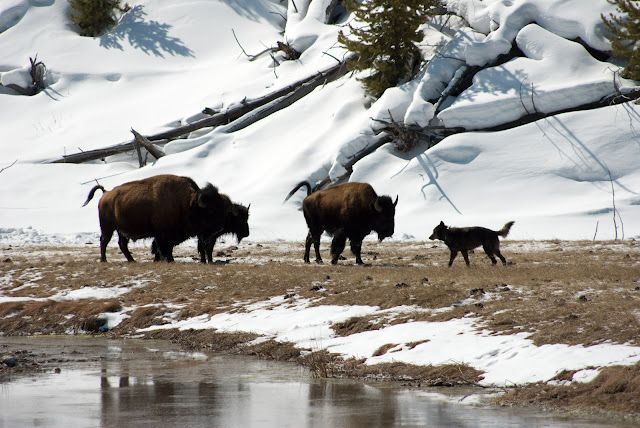 The Canyon pack had returned, after being absent from the study area for 37 days. Sweeping along their usual route from Norris to Madison Junction in one or two days, the wolves were on a search and destroy mission.  Luke and I had followed their tracks down the Madison River for several miles, until we came upon the three member pack.  The grey, the black, and the white.  Aaah how great! I think to myself.  I love the Canyon pack, probably my favorite.  They had double-backed on their tracks and were headed back toward Madison Junction, but Luke and I had work to do (ie trying to find more wolves), so we left Canyon pack knowing that we would probably miss something exciting.  After finishing our duty up the Gibbon, headed back to Madison Junction, I hear Gary, the Madison ranger, hail me on the radio.  “Three mike forty three (that’s me)…six oscar one two (that’s Gary)…I’ve got something interesting going on down here at the Wildlife Exhibit you might want to see.”  Knowing that Canyon pack was in the area, I replied, “I think I know what’s going on, I’ll be there soon.”  Gary replied “yeah, we’ve got an animal in distress.”  In distress!  Oh goodie!  Luke and I could barely contain ourselves.  And of course we were stuck in a construction zone for five minutes, stopped by the flag lady.  Repeating Gary’s words “in distress!” over and over again didn’t relieve our anxious itch to be there now, watching wolves and the “animal in distress”! 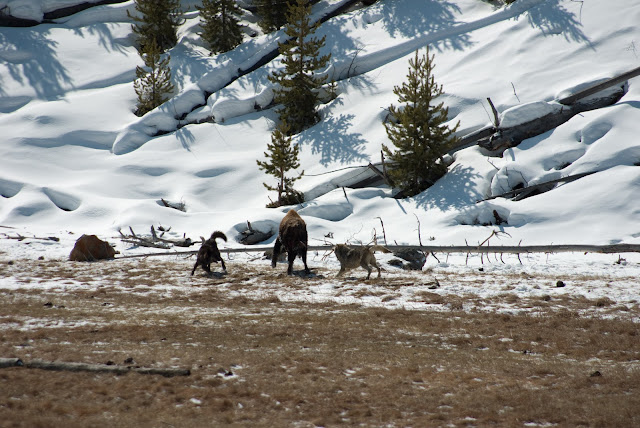 We finally arrived to the Wildlife Exhibit, and…nothing was happening.  Great, we missed it all! But Gary was there and said that the wolves had just disappeared into the trees, and they had been working on taking down the aforementioned yearling bull bison.  Every twenty minutes or so, Gary said, the pack would come out of the trees, work over the bison, then go back into the trees and rest.  In effect, they were trying to gradually wear the young bull down enough until his fateful fatal end.  We left the road for a bit, trying to see if we could find the wolves in the trees, when suddenly from behind us, one by one, the three wolves dropped off the road, trotting adjacent to us not twenty feet away.  They hardly even acknowledged out presence, but continued straight for the young bison, who had wondered upstream and had crossed to the other side of the river.  Swimming across the river, the black wolf caught up with the young bison and ran him back downstream toward us.  The bison eventually stopped running and faced the wolf.  With his head bowed low, butt in the air, tail wagging (similar to the “play” stance, if you know dog behavior), the wolf would get close to the bison, then shoot to the side as the bull made a quick charge, then get back in the bison’s face.  He would repeat this over and over, trying to wear down the bison and possible get the bison to make a mistake.  Eventually, the white wolf got interested and crossed the river to help. [A weird thing about the wolves that I’ve noticed is that they frequently seem nonchalant about attacking their prey.  One wolf will be making a move on the prey, while the others just sit on the sidelines staring, like they are deciding whether it is worth their time or not to help out.  And often they won’t assist in the attack.]  Hooves were flying everywhere, horns were tossed violently at the wolves, and the wolves kept coming in for more.  From the back, the white would sneak in a lunge while the black distracted the bison from the front.  I can still vividly see the bison kick that knocked straight into the white wolf’s head.  Her head flung back with the blow, but she was only momentarily stunned.  It was at that moment that I realized how dangerous it is for these wolves to attempt taking down prey, bison especially.  I actually began to feel afraid for the wolves, afraid that I would witness the death of one of my favorite wolves. 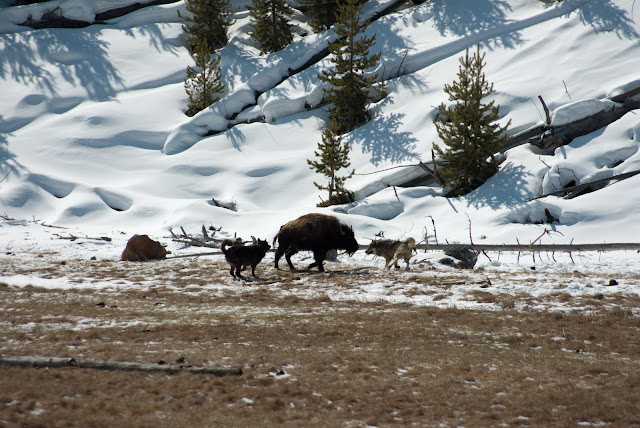 But the white wolf was fine, and she kept at it.  Into the river, then back on the meadow, the wolves continued their harassing of the bison.  The gray wolf had joined in too, as well as another bull bison, trying to help defend the young bull.  There were several other bull bison there as well, but they virtually ignored everything that was going on around them and kept grazing, which seems to be very strange behavior.  It’s as if they know that the young bull is done for and it’s not even worth raising an eyebrow at.  Eventually the wolves retired to the trees again for a long rest.  The wolves lazed about in the trees and the talus hillside, rolling around in the snow, sniffing interesting things in the dirt, taking cat-naps, surveying the area, etc. 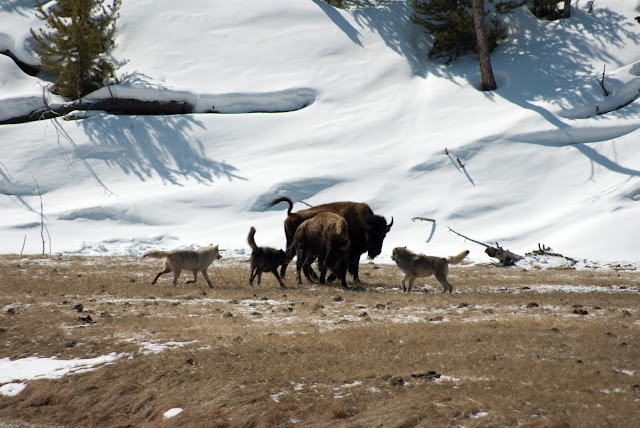 As the wolves lounged about, many vehicles (mostly construction and maintenance workers) and bikers passed by, and even though we were all lined up with scopes and binoculars looking at the wolves, hardly anyone stopped to see what we were staring at.  This always amazes me.  Nearly all of these people would be stoked to see wolves, and, goodness gracious, you’re in Yellowstone National Park!  There are incredible large predatory mammals everywhere in the park, and you don’t even take a second to stop and take a look or ask what we are seeing!  They just keep on moving, oblivious or insensible to the world around them.  Most of us never take a look around.  If you never look, you won’t ever know, and you won’t ever care. 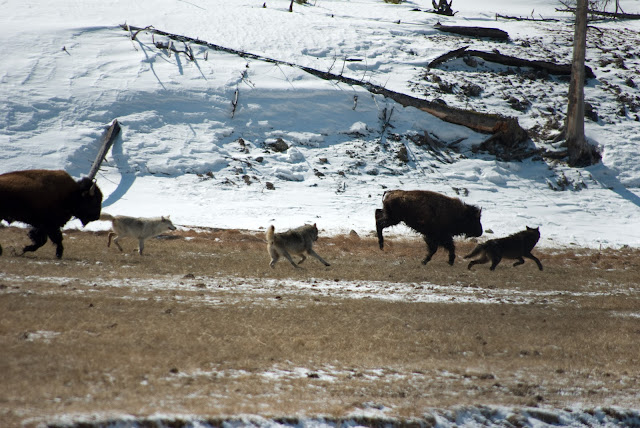 The gray wolf came out again and made a few attempts at the calf, but could do nothing alone, and the others weren’t too interested, so he retreated back to the trees.  It is always so hard to leave when you are so close to seeing the rare event of wolves taking down their prey, but we knew that these attacks can last up to two days, so we made the decision to leave, because we had work to do (like watch some elk poop so we could collect it). 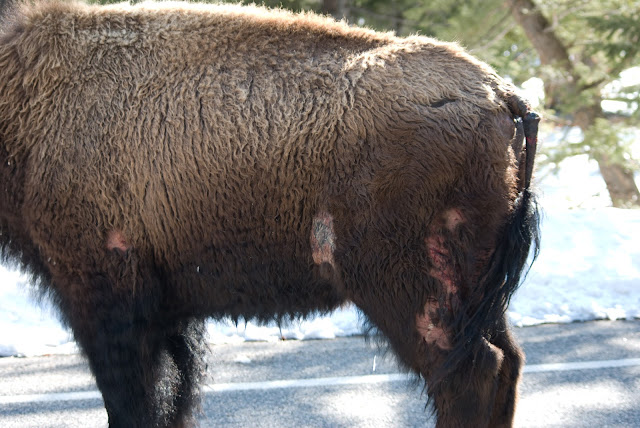 That evening, we found the injured yearling bull making his way down the river.  I think that the Canyon pack fell asleep and accidentally slept too long, losing track of their prey!  Two days later, he would be seen walking stiffly and sorely west, almost out of the park.  A noble fight for survival for both the wolves and the bison, and the young bull would survive.  It's not an easy thing to take down a bison, even a small one!  Now, will the injured bison survive future attacks from the freshly awakened  grizzly bears!
Here are some of my favorite pictures of the three wolfateers: 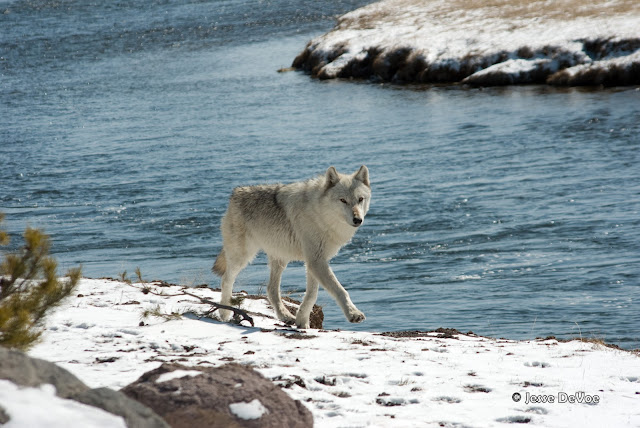 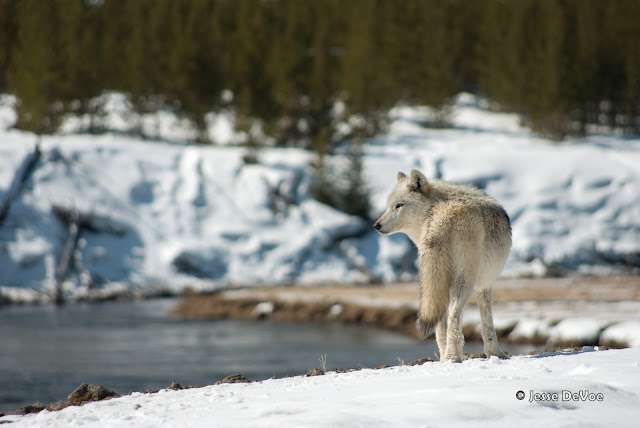 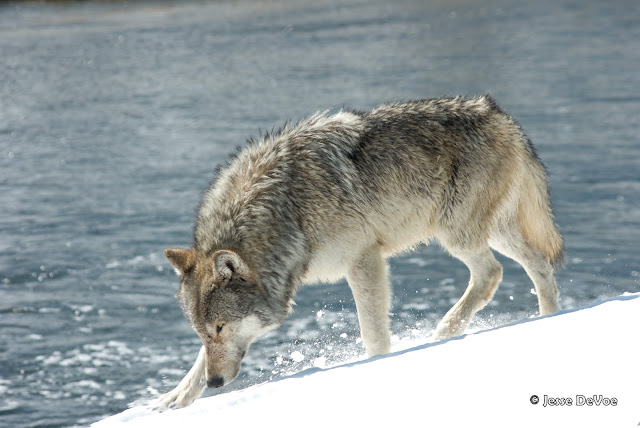 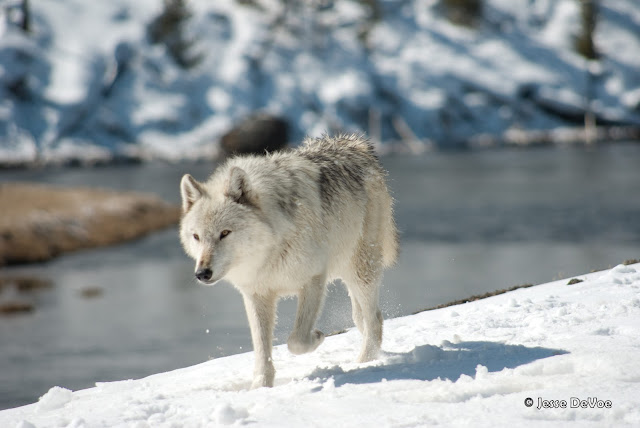 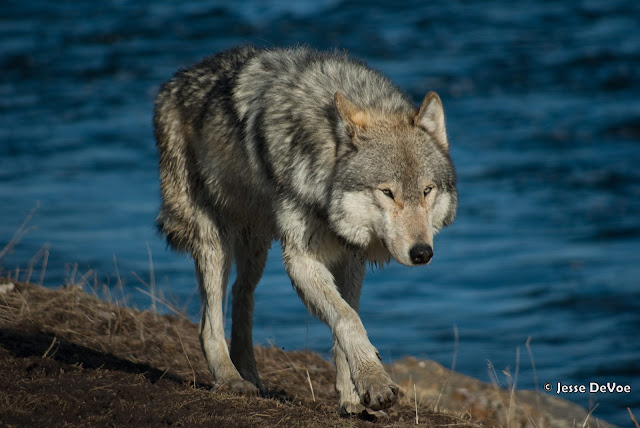 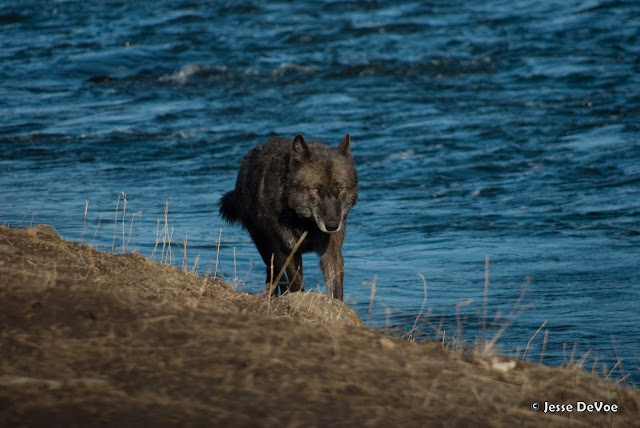 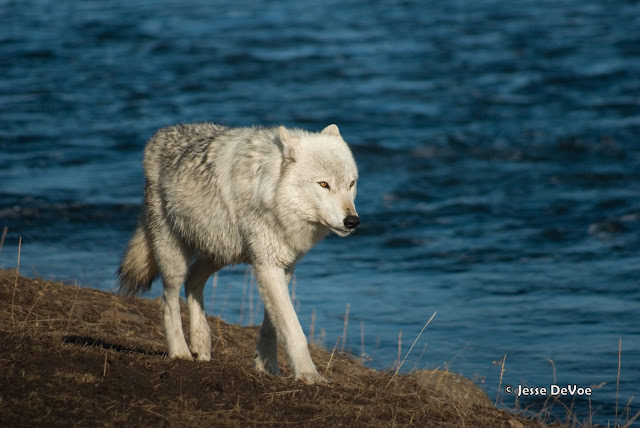