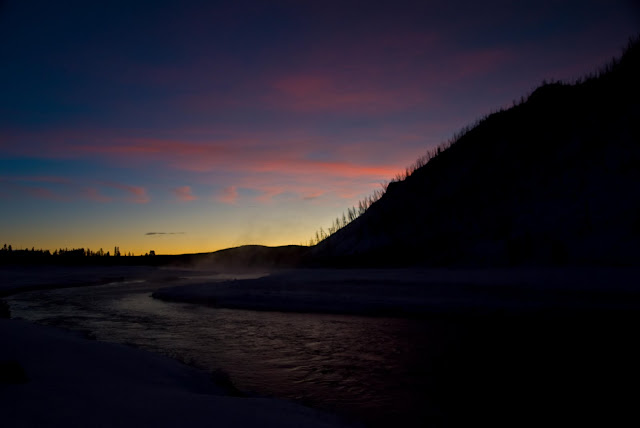 There is almost nothing quite so terrifying as going on a night ski alone…during a new moon… in a place with one of the highest concentrations of large mammals roaming about.  Gaining speed on my skis, headed down from Terrace Springs, I begin to think, “huh…wolves like to take down their prey from behind when they are running away.”  I take a quick glance over my shoulder, just to make sure there are no black blobs bearing down upon me.  I lose my balance slightly, causing me to throw one leg high into the air, barely staying upright…and then I think, “huh…wolves like to take down prey that show some kind of weakness…like being clumsy.”  I find being terrified out of my mind sort of soul cleansing. 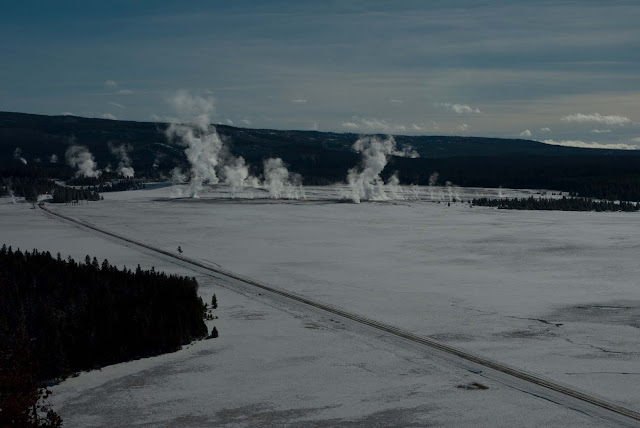 At 9 am this morning, we were notified that the 24-hour switch-over period is in effect.  This means that we have until 9 am tomorrow (which will be today by the time most of you read this) to get our vehicles out of the park and our snowmobiles in.  Within hours of the notification, the roads between Old Faithful and West Yellowstone became highways…cars and trucks barging out, snowmobiles zipping in.  West Yellowstone has suddenly come alive, turning from a quiet and nondescript town to a noisy and lively town.  The winter tourist season has thus begun.

And, concurrently, our winter freezing season has begun.  There is no more jumping into a warm car and blasting the heat to warm up stiff and frozen fingers and toes.  Fortunately, the snowmobiles are equipped with hand and feet warmers (but I doubt they will be effective at -20 degree temperatures).  I always like simplification, and I find the snowmobiles to be much simpler than vehicles. 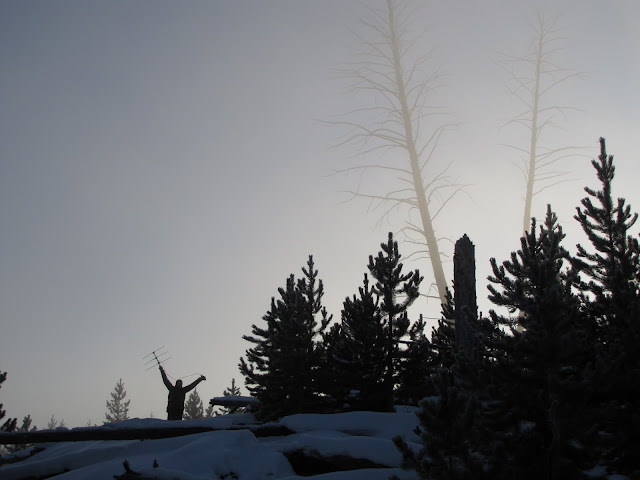 On other headlines…we found the Old Faithful elk!  You may recall my distaste for the Old Faithful girl (hoping she would be eaten by really mean wolves) because we could not discern the direction of her collar’s signal.  She had befuddled everyone who tried to find her.  We had finally obtained a good triangulation on the direction of her signal and decided to hike in.  I never would have expected to find her where I did.  She was hanging out with one other cow and two calves in steep terrain with downed logs, dense trees, and deep snows…exactly where I picture wolves taking down prey.  But maybe she was being smart.  Maybe she chose such a strange location because the wolves would never guess any prey would be so far back in.  But the snows will push her back out into the valley soon…back to the land of wolves.  I enjoyed hiking in to find her so much that now I don’t want her to be eaten!