Silence of the Wolves

Posted by Unknown on December 11, 2009
The trails of wolf tracks have ceased to be imprinted across the meadows and mountainsides.  I have gotten my wish…the wolves have gone to greener pastures in other areas of the park, allowing us to take a deep breath for the first time.  Having masses of wolves is very overwhelming (as I mentioned in my previous post).  But now, without the wolves…it’s kind of, well, boring…!  The grass is always greener and lusher on the other side I guess!  (Unfortunately for Luke, he arrived the day that most of the wolves left the study area…our first guest to not have visually seen wolves.  However, Luke did find a killsite, which was very exciting!  Thanks for coming bro!). 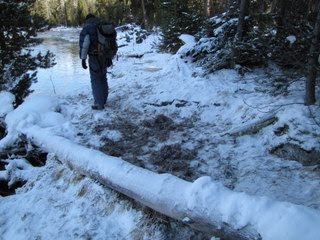 This mass influx of wolves in early winter is apparently fairly typical (this from my well-respected boss and biologist role-model, Robert Garrott).  The wolf packs, in preparation for the winter months, make large movements across their territories to secure boundaries and take stock of the amount of available elk and bison steak (while eating some along the way).  This seems to be exactly what the Gibbon pack did.  The Gibbon wolves are the head-honchos, laying claim to just about the entire study area.  The pack moved through all three of our drainages within three days.  Whilst this was occurring, the Cougar, Grayling, Canyon, and Mollie’s packs were making short forays into Gibbon’s territory, possibly hoping to expand their territories or to do a kill-and-run before Gibbon sees them. 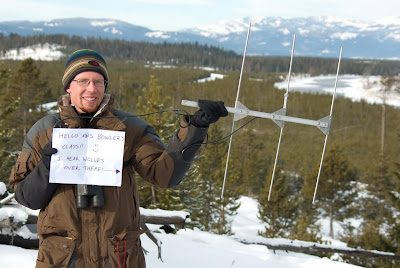 But now, they are all gone (well almost...we occasionally detect wolves on the periphery of our study area, like the one I heard today from the Grayling pack [see above picture]...there really is a wolf over there!).  We wave our antennae in the air, flipping through frequencies and listening to the static hiss, hoping for the “beep….beep…beep” of a collared wolf.  The wolves will often leave for weeks at a time, which makes sense.  Elk, their primary prey, are actually very difficult to kill.  The best chance at making a kill is to catch the elk when they are vulnerable, and they are most vulnerable when they are in steep, rocky, densely forested terrain.  The elk, however, know this as well, and will avoid these areas when wolves are around.  So when the wolves are lurking nearby, the elk run to and group up in the meadows and rivers.  In such a place and grouped up, the elk are able to defend themselves, preventing the wolves from making a kill.  As a wolf, you could just wait around and hope that an elk presents itself as vulnerable by leaving the group, but this won’t happen if the elk know you are around.  Or you could leave for an extended period, allowing the herd to relax and move back into the steeper, rougher terrain (where all the good forage is) and then BAM! come in like a whirlwind and catch them unaware.  And that’s exactly what the wolves tend to do and why many of the killsites are found in steeper, rougher, or densely forested areas. 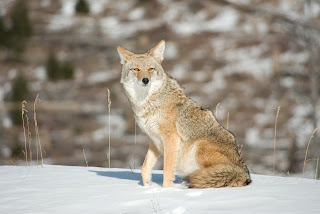 Life is good here in Yellowstone, I really have nothing to complain about (like I did in my previous post…you are very right Vicky!).  It’s very cozy in our “little cabin” in the woods.  Elk, bison, wolves, coyotes, red fox, mountain lion, bobcat (which I saw yesterday!), marten, and snowshoe hare roam and lurk about through the forest. 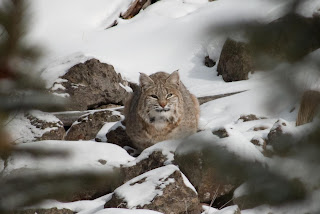 Billows of white and gray steam jet into the cold, blue sky.  Trees stand stoically, frosted from the geyser steam, frozen in time.  The snow thinly blankets everything.  Tracks in the snow lay waiting to be covered by a new white canvas.  Trumpeter swans trumpet to their compatriots downstream.  The rivers, flowing ice-free all winter due to hydrothermal activity, are alive with wintering geese, goldeneyes, mergansers, and mallards.  This is what I wake to every morning and take in every evening.  Such things are mystical and grand, and nothing of that nature shall be taken for granted. 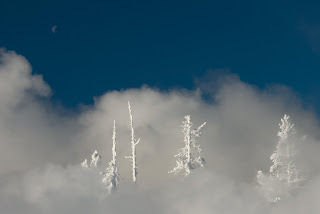